Getting the Shot 12: Fish with a Vignette Sauce 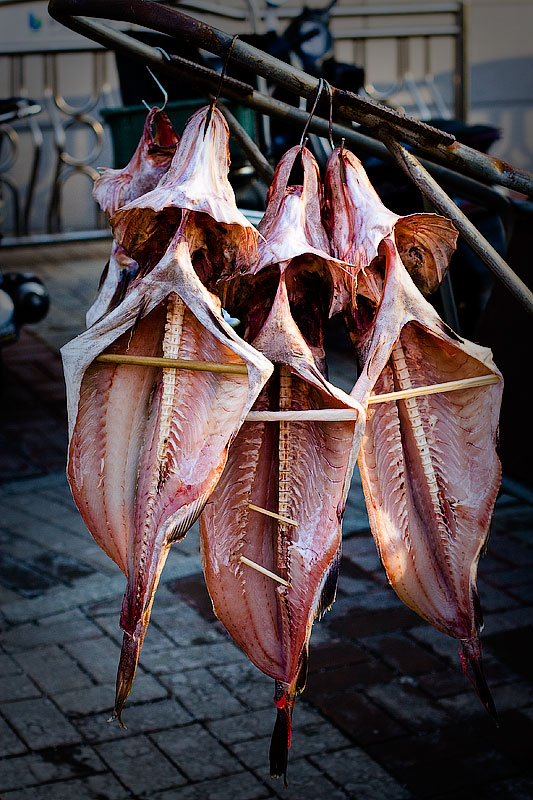 The Shot: This kind of shot that takes a common street (at least around the coastal areas of Korea) and draw attention to the subject by adding a slight vignette to the image. Some may say that this style is over-done but I think that with the right usage it is a nice effect to what would otherwise be  a boring shot.

The Location: Between Noryangjin Market and Jagalchi, I am pretty sure there is are millions of shots to be had and tons of them are on the web. The workers in Jagalchi seem almost bored with foreigners wandering through looking at the strange creatures for sale. However, that doesn’t stop the hordes of tourists coming through and checking it out. For me, there is always something interesting going on there and honestly I don’t get there enough as I should.

This shot was taken ut in front of the main building. These fish were just hanging out on the front of an “ajumma cart” or one of those two-wheeled carts that you see ajummas pushing around. For some reason it just looked cool and both myself and my Father took some shots of it.

The Post-Processing: Now this is the meat of this post as I am sure you are not just sitting there saying “Holy Crap! that is an amazing shot of fish drying! How did JT ever get a shot of that?” but rather “That’s a nice effect…. what did he do to it?” Well that is exactly what I am going to tell you.

OK, first let’s get started with the usual stuff. This was shot in RAW as I like to control the well… everything after I shoot. Most of the time I just change the temperature, contrast, vibrancy, and curves. Once in Photoshop I use a slight smart sharpen to make those lines a bit more crisp and that is about it. However, in this case I wanted to add a bit more attention to the fish and thus a vignette was needed. I am going to show you a few ways to do it.

Style # 1: In Camera Raw This is the easiest one of the bunch. Simply click on the little lines icon next to the camera icon in the camera raw dialogue box. Then go down to post-crop vignetting. This will keep the vignette no matter if you resize the shot or not. From there you can adjust the sliders. 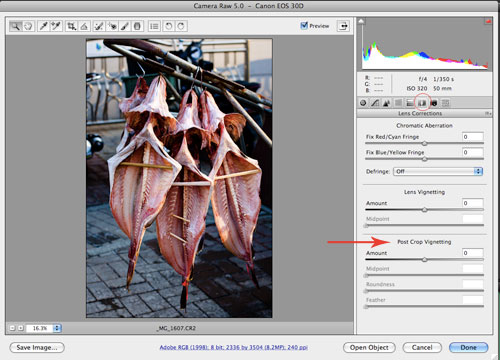 Style #2 In Photoshop VIA layers:  OK so if you are not familiar with camera raw or you don’t use it, here is another way that is just as easy. When you have your image ready, hit command/ctr(PC) J to create a new layer and then fill it with black. Then Choose The “RECTANGULAR MARQUEE” tool and select an area about an inch inside the the borders of your shot. Head up to the selection menu and choose “modify” and then “feather” For a low res shot for the web I usually go with between 50 to 80 pixels. Then hit enter and then “delete” this will punch a hole in the centre of your shot. Hit command/ctrl D to deselect the area. Now you can use the opacity slider in the layers panel to adjust the strength of the vignette.

Style #3 In photoshop VIA Curves Adjustment Layer:  Here is my new way because sometimes I want to modify the vignette a little more. Basically, when you have your image open choose a curves adjustment layer. and drag the right side down to make the image dark. Next choose the rectangular marquee too again and draw a box on the inside of your image. Now, with your foreground colour set as black, click on the layer mask and hit command/ctrl (PC) delete. This will punch out the inside of that layer. Now if you are using CS4 or above you can now click the “Mask” tab in the adjustment layer panel and adjust the opacity and feathering. Also note that you can use free transform on this as well. For a video of this tutorial check out Dave Cross’s explanation of styles 1 and 2

So that is it. Now go out there and play around with these styles.

How to handle those “Meh…” Days

I always love coming to Gyeongju no matter how bad