Buying a Tripod in Korea 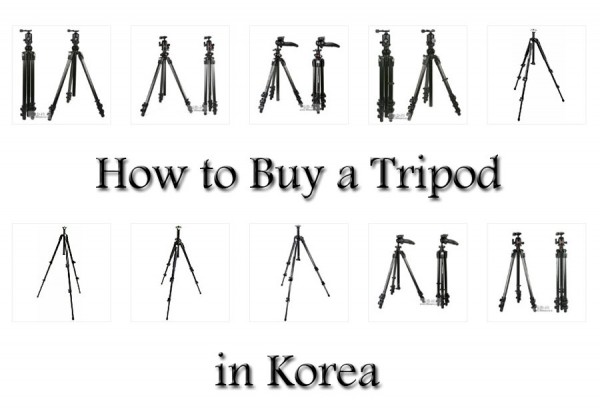 So the topic of tripods came up recently and I was surprised at how much people didn’t know about this seemly essential tool of photography. Now, depending on what you are shooting, for example if you call yourself a “street photographer” then you would probably more wise to spend your money on skinny jeans and thick black rimmed glasses (I’m kidding). However, for the rest of the photography realm a tripod is a needed investment.

The first question that usually pops up is “why do I need one, anyway?” That is a valid question as at first glance,  tripods are bulky, heavy and expensive. I usually wait until people go out and try and take their first low-light shot/urban night shot with their new camera. Upon pressing the shutter release they will hear a slow “chunk……………..chunk” and that is the sound of your shutter opening long enough to take a very shaky/blurry photo.

This creates the want and need for a new piece of equipment. Now, before you start thinking about buying “a cheap one” , I will quote the accomplished photographer Shawn Parker whose advice is worth thinking about:

“Tripods are something you really, really shouldn’t skimp on – plan to buy one, maybe two in a 10 year period and it doesn’t seem like such a bad idea to spend over a grand. Why the heck would you trust $10,000 in lens + body to a $500 set of legs?”

While $500 may seem excessive, think about how much you have invested in your camera. Would you trust that to a cheapo tripod? The worst part is that most people tend to spend less on a tripod as they feel that it is an unnecessary expense. They see something at the store and think “hmmm 50,000 won ain’t bad…” or “Huh… it was taped to the side of a milk carton at Home Plus. So, it must be alright”

I equate this to putting your brand new camera on the ledge of a table during a party. It maybe alright for a little bit but after awhile you know it is going to get knocked over.  That is the same as putting your expensive camera on a set of bargain-basement legs. If you want to see a humorous look at what we are talking about, take a look at Digital Rev’s test and you’ll understand what we mean.

So now you have a hole burning into your pocket and you are heading out the door to spend it on something with three-legs. So what should you look for?

I put $400 into a good set of alloy legs and a big, heavy ball head. They’re a little heavier than carbon fibre, but they’re as steady as they come. If you’re on a budget, do alloy legs instead of buying cheap carbon fibre. My 2c.

First look for the materials. If weight is a big concern then you might want to consider going for a carbon fibre model. For those that don’t want to drop that much on a tripod then Aluminum is the way to go.  It is just as sturdy but weighs a little to a lot more but costs a lot less.

Next is size. This is often overlooked but it is something that you should consider. Are you going to be travelling or are you looking for something that is a lot larger? Tripods legs some in many lengths and much of it is largely based on the usage. Meaning that travel or backpacker-style tripods will be small and designed to take up less space.

The can be sold together with the legs or as a mix-and-match. It is however something that you should consider. The reason is that your “head” need to be strong to support your camera and have the sensitivity to be able to make fine adjustments. These may seem like minor points but trust me when I say that there is nothing more aggravating than taking a long exposure and finding out after several minutes that your head couldn’t hold the weight of your camera and started sliding.

I will get into the different styles of heads in another post but for now I usually recommend a ballhead which is the most common in many regards.  It is versatile and easy to use. Just find one that can handle your biggest/heaviest lens. Don’t be afraid to test it out or ask around. If you have a heavier lens like a 70-200mm 2.8 L then you are going to need to invest in something that can handle the weight.

This is a loaded question when it comes to Korea. I am going to say this again “there is no magical night market where you can buy a gitzo carbon tripod for $50” So get that idea out of your head. This is going to be an investment.

First, I would grab your gear and head down to your local camera shop and test out different set-ups. Try out different head styles. Check the legs. See if you like the clamp-style or the screw-style legs.  See if your heavy lens or set will stay steady and slowly tilt.

My first recommendation would be to head down to you local shop and test a few out. At this moment in time, forget about looking for the best deal or where you can save a few pennies. When you find the model you like, talk to the shop keeper and see about getting that deal. Ultimately, what I am saying is to not let the price determine your purchase.

The second thing is to hit the internet. If you know the brand and model, because you have tested it out in the shop, hit places like Film Nara or Gmarket.  Here you may get that coveted deal that you are looking for. At any rate, try to keep things simple and local. That means resist the urge to hit amazon as much as you can.

I have nothing against them or any other shopping site outside of Korea, but I just see it as unnecessary. Perhaps you may save $50 but I would rather be out shooting than wondering if I have to pay duty and or why it is taking so long to get here. Items ordered in Korea usually take less than a week and you don’t even need to use a Korean credit card.

If you do decide to go the long way and order from outside Korea, then just make a note that duty will be charged for all items over $400. I am not sure the percentage you pay but feel free to check the Korea Customs and Immigration Page

The key here is don’t skimp or you will regret it later. The point I think that we are all try to make with this is that there are no shortcuts. You can skimp on many other things but you should never skimp on the thing that holds your main investment up.

My advice would be either buy a used one if you can afford a tripod or go all out. Ideally if a friend is up grading or someone is leaving and doesn’t want to haul a tripod around and has bought a smaller travel version. By going all out I basically mean save a get a quality tripod. It doesn’t have to by carbon fibre or anything but get the one that suits your shooting style.