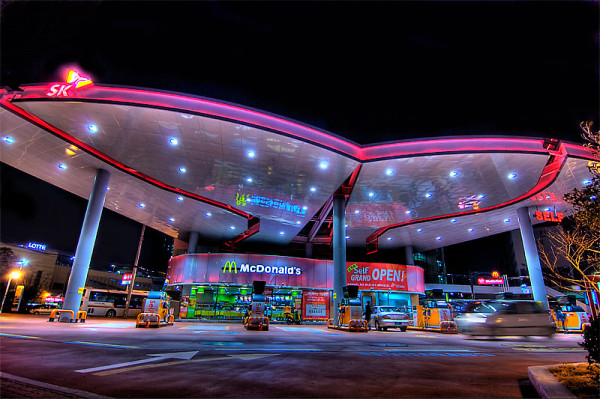 A few years ago I saw a strange sight on my drive through the my new hometown of Ulsan. It was a brightly lit drive-through McDonald’s connected to a self-serve gas station. Both of which are fairly normal in the West but rare (at that time) in Korea. I stopped and snapped of a few shots for an HDR shot. I must admit that it was to be more or less something that I just wanted to point out to the local people in Ulsan. Little did I know that it was to make it’s rounds around the world.

The shot itself is nothing special and was actually quite annoying to process. For some reason the processing created a massive amount of noise and was something that my noise-reduction software couldn’t even handle. So I used layers to mask out the sky that was causing the major issue. From there I just played with the colours a bit to try and bring out the reflections of the shiny “wing-like thing” that makes this location so unique to numerous websites.

The shot first was noticed by some dedicated McDonald’s groups on Flickr and that was nothing to write home about. It was when it was picked up by a website called “Twisted Sifter” on September 25th 2012 that things really picked up for this photo. The photo hit #26 on the list and really got some circulation. At the moment, my flickr image sits at almost 2,000 views.

After this list got circulated,  it was re-shared all over the place. The original links back to my flickr page or anyone else’s were long gone. Does this make me angry? Nope, again this is a one-off thing and that people reading these lists don’t really care who the photographer is, just the interesting picture.

At any rate, strangely enough, it made it all the way to the USA Today site in their top 10. Keep in mind that all of the numerous articles and re-shares are the exact same content and photos from the original Twisted Sifter list from last year. Nothing new beside maybe a comment or two have been added. So this is not investigative journalism here but more or less like your friend’s friends sharing a photo you took that was on your friend’s facebook page (if you can still do that).

I guess if I were to get picky then I would ask for some credit for the shot. That responsibility also is on me a little bit too as I should really ave put a watermark on the photo. At any rate, It does put Ulsan on the map for something other than whales and huge industrial factories. To answer the question from the USA today article; Yes there are more now. Also the “big wing-like thing” is actually the SK Energy Butterfly logo.

Where to Shoot: Fukuoka, Japan